We recently went to visit family in St. John’s, Newfoundland and Labrador, Canada. We have visited Newfoundland before and we also lived there for about three years.

We visited The Cabot Tower on Signal Hill on a cloudy day.

“Construction of the tower began in 1898 to commemorate the 400th anniversary of John Cabot‘s discovery of Newfoundland, and Queen Victoria’s Diamond Jubilee.” – Wikipedia

“In 1901, Guglielmo Marconi received the first trans-Atlantic wireless message at a position near the tower, the letter “S” in Morse Code sent from Poldhu, Cornwall, United Kingdom. Cabot Tower is now the centre of the Signal Hill National Historic Site of Canada,[1] with walking trails and an interpretation centre.” – Wikipedia

“Hiking trails lead to the fortifications at the Queen’s Battery Barracks and along the perilous cliffs, including spectacular but difficult North Head Trail down to Battery Road.”- Planetware.

View of St John’s harbor and the Queen’s battery from Signal Hill .

Me fooling around at the Queen’s Battery.

Part of the Harbor Defense of St. John’s.

“Construction of the 9 gun battery began in 1796 and was virtually complete in 1797. The battery was located at a strategic point overlooking the narrow harbor entrance some 350′ below and directly opposite the Chain Rock Battery. About the same time that the battery was complete a guard house (barracks) and a gunpowder laboratory were also completed.

The armament at the battery fluctuated over the years but by 1812 it was shown to have two brass 8″ howitzers, six iron 24 pounders and one iron 9 pounder, for a total of nine guns and was reported to be “…in tolerable good repair…”.-Fort Wiki.

Cannons along the trail from Cabot Tower to the Queen’s Battery.
Our Grandson’s photo.
Photo-shopped.

Hiking and parking is free, but there are entrance fees for the exhibits inside the Cabot Tower, Signal Tattoo, exhibits,etc. 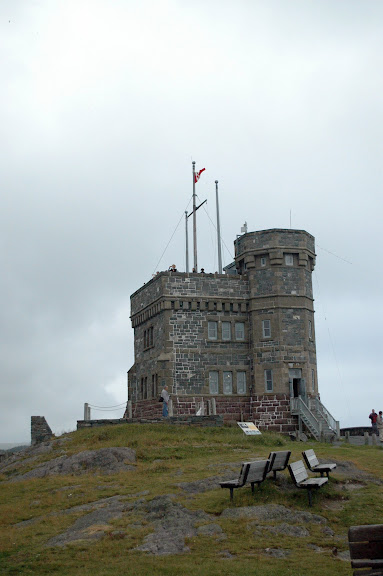