This is a photo of a negative which I got from my father. The negative is thick and quite big, so it is difficult to scan. I took a photo (Nikon D70) of the negative on my My Light-Box and adjusted it in Adobe Photoshop.  It was taken at the Grand Parade, Cape Town. Circa 1939. It looks as if it was taken on the same day as the first photo. The backdrop looks the same as in the photo in Caledonian Market S.A. Aka Cape Town’s Caledonian Market

“Up until the early 1980s, the Grand Parade was described as “the pulsating heart of Cape Town,” a resemblance of London’s Petticoat Lane or Hyde Park corner, where raucous commercial activity would come to assert the space’s character as a long-standing and essential feature of city life. Customers had the luxury of being able to buy anything from flowers and fruit to cold drinks and even property in Belville, all at one flea market. At that time, many of those running stalls were third generation parade fruit-sellers.”- Urbanafrica.net

“Movie Snaps, a well-known photography studio that operated for decades on the Grand Parade, along with a smaller branch at Muizenberg beach.”- Snapshots of different times, same place

A walk in time

“The ‘Movie Snaps’ studio that began in a building on the edge of the Grand Parade at the start of the second World War, provides the photographic backdrop of Jewish families in South Africa on the one hand, and on the other, the further annihilation and fragmentation of lives legislated through apartheid in 1948. Positioned opposite the Cape Town General Post Office, photographers snapped thousands of Cape Town residents going about their daily lives, continuing this practice for over forty years.” – Movie Snaps, Cape Town Remembers Differently

“Once they crossed the photographer’s chalk line, they were convinced to take a ticket in the hope that they would purchase the image a few days later from the kiosk. These snapshots show women resplendent in tulle dresses or wearing flared bell-bottoms, sailors boasted their crisp white uniforms while Muslim children celebrated Christmas with their Christian friends. The pictures illustrate moments of ordinary living in extraordinary times. They offer a counterpoint to the now familiar narrative of apartheid’s series of carefully composed images of burning tires, mass protests and violence and urge a consideration of the afterlives of apartheid.”- Movie Snaps, Cape Town Remembers Differently 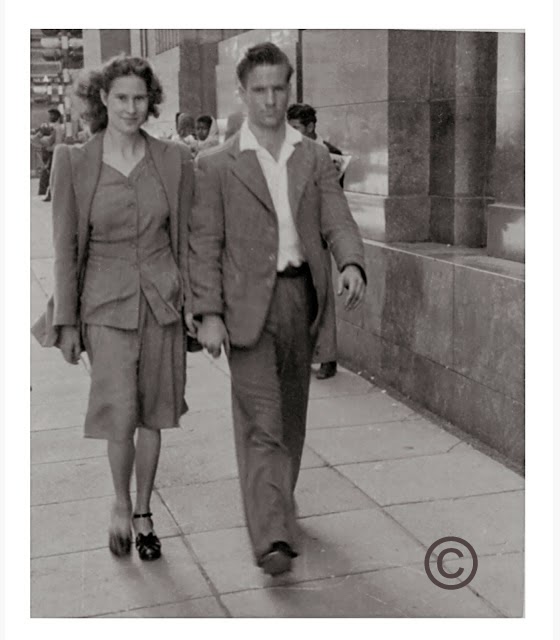 My My Mother in Law and My Father in Law
Photo: Film Tests, 68 Joubert Street, Johannesburg, South Africa, Circa 1951.

Durban Beachfront with Scotty’s yellow booth on the right.
Pinterest.

Durban in the 60’s
The Little Top.
Durban Happenings.

“A photographer, Scotty, always dressed in a khaki pith helmet wandered around outside the Lido taking ad hoc photographs and giving folk a numbered card to pick up their photos the next day. His circular kiosk, always plastered outside with his shots of beachgoers was on the promenade on the hotel/ road side of the lido and Scotty had a wide variety of painted boards with heads cut out of them to enable people to pose as, for example, a muscular weightlifter, Superman or a busty female in a polka dot bikini. ” –  Facts about Durban

DISCLAIMER: Some images unless otherwise noted, were taken from the internet and are assumed to be in the public domain. In the event that there is still a problem or error with copyrighted material, the break of the copyright is unintentional and non commercial and the material will be removed upon request.